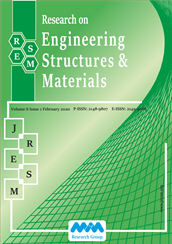 For submitting new manuscripts or tracking the existing ones, login or register to the Submission Tracking System.

Our journal is open for new team member applications in various positions, such as: editor, editorial board member, copyeditor, language editor. More info is here.

The journal of RESM is open to proposals for special issues on emerging related topics. More info is here.

Deformation of most pavements is practically inelastic. Thus, the exact calculation of pavement deformation often requires use of a damage evaluation law to characterize the stress-strain relationship mathematically. Asphalt, polymer, and reinforced concrete are all examples of such pavements. However, concrete pavements without reinforcement are generally assumed to behave linear elastic. Concrete pavements without reinforcement are used sometimes as permanent pavements with dowels such as airport apron pavement, but sometimes they are used as temporary pavements during the mobilization or initial phases of new construction projects as well. When used as permanent pavements, their design is performed similar to rigid pavements, which has international acceptance by highway engineers, or by finite element analysis. When used as temporary works during the mobilization phase, or when a road is urgently required on a construction site, their design is often problematic, because advanced highway design or finite element analysis might be momently unavailable. A rapid, conservative, and reliable hand calculation method for temporary concrete pavements without reinforcement is therefore required. In this study, design charts are provided to allow hand calculations of temporary concrete pavements. In addition, a numerical example is solved to illustrate the use of derived charts. The effects of certain parameters on the stress behavior of concrete pavements are also investigated.

Return to This Issue

Return to the Archive

21/02/2020 Collaboration for SET 2020: Editorial Board of our journal and Organizing Committee of the 19th International Conference on Sustainable Energy Technologies (SET 2020) have agreed to collaborate. Extended versions of the selected papers from the conference will be published in our journal. For more see Events.

The paper authored by Marcelo Mesquita do Amaral, Matheus Wanglon Ferreira and Mauro de Vasconcellos Real entitled as “A simplified method for analysis of reinforced concrete beams exposed to fire situation” is awarded the